Exciting news!  I’m already seeing signs that Piper is pregnant.  She’s due to deliver puppies around December 7 and we couldn’t be more excited for our first litter to arrive at Labradoodles of the North.  As you may have read, we’ve been raising these dogs since 2007 with ArborGate Labradoodles but this will be our first litter in the north.   Below you’ll find a dog pregnancy calendar taken from http://www.pets4homes.co.uk/

Piper is already at Day 21.

Ovulation and subsequent mating and fertilisation occur- although you may need to mate your bitch more than once for successful fertilisation. The countdown to birth begins from ovulation, although it can be difficult to monitor ovulation independently and without testing your bitch’s body temperature daily. Your bitch may begin to exhibit some signs of morning sickness, just as can happen with people. Be on the lookout for any potential signs of infection which could have been contracted during mating. A light pink discharge from the vagina may or may not be present- this is normal, and not cause for concern.

Keep up your usual feeding and exercise regime, but consider adding a nutritional supplement in consultation with your vet to support the pregnancy and your bitch’s changing needs.

Do not use any flea treatments or wormers during the period of gestation without first consulting your vet.

During the second week of pregnancy, the cells which will develop into your puppies begin to grow and separate, and the tiny new embryos descend into the uterus for the remainder of the period of gestation. Your dog should still be fed and exercised normally during this time.

During the third week of gestation, the embryos will begin to implant into the uterus, where they will receive the vital nutrients and life support which the bitch’s body provides during their time in the womb. The foetuses are under a centimetre long at this stage.

Continue to feed and exercise normally, but begin to monitor your bitch for increased appetite and provide for her developing needs accordingly. Do not make any sudden or unnecessary changes to the content of her diet.

Towards the end of the fourth week of pregnancy, a vet or experienced breeder may be able to detect the presence of the developing puppies by gently palpating the abdomen. The eyes and spine of the foetuses begin to develop, and their faces begin to take shape. The foetuses grow to around 1.5 centimetres long during week four. Your bitch’s teats may begin to swell at this stage, and she may have a thin, clear discharge from the vagina.

The fourth week of foetal development is considered to be one of the most formative stages of the pregnancy, when the growing puppies are most vulnerable to damage and developing defects. At this stage of development, begin to limit rough play and particularly strenuous exercise in your dog. Consult with your vet about your bitch’s changing nutritional requirements and find out if you may need to feed any supplements.

Amniotic fluid in the uterus increases in order to protect the pups around day 32 of gestation, and so you or your vet will no longer be able to detect the presence of puppies by palpating the abdomen. From week five onwards, the puppies are much less susceptible to developmental issues and defects. The individual toes begin to form, and claws and whiskers start to grow. The foetuses also develop their male or female sexes during this time.

Your bitch’s weight will begin to noticeably increase at this stage, and you should increase her food rations now if you have not done so already. Feed little and often, and start to introduce your chosen puppy food into the mix.

If you have decided to have an ultrasound scan done on your bitch during pregnancy to try and ascertain the number of puppies and identify any problems, this is usually performed during the fifth week.

Your bitch will have a noticeably larger tummy and her pregnancy will be obvious to most people. Her tummy will grow on a daily basis, and her nipples will become noticeably darker. The puppies will begin to develop their markings and the skin pigmentation that will eventually determine their colour and looks.

Increase the food which your bitch is given to as much as she wants to eat. Increase the ratio of puppy food in her diet. You may well be feeding a multivitamin supplement at this time too.

Start to prepare the bed or box which the bitch will use for whelping, and make it comfortable and inviting for her and well padded. Decide where you want to locate the box for the birth and first few weeks of the puppies’ lives, and encourage your bitch to begin sleeping there.

Your bitch will begin shedding the hair on her belly in preparation for the birth- this is totally normal and no cause for alarm! The puppies will continue to grow and develop, and now look almost completely fully formed.

Towards the end of the seventh week, stop feeding the puppy food you have been introducing and go back to feeding her regular nutritious food- as much as she will eat. This triggers the bitch’s body to begin to store calcium from the rich puppy food she has been fed until this point, an important mineral during the later stages of the pregnancy.

Your puppies could be born at any time from now onwards, so be prepared! Avoid any rough and tumble play or stimulation which might lead to the onset of early labour, as ideally your pups should spend another week in the womb. Your bitch will probably begin ‘nesting’ at this stage, and you may even be able to see and feel the puppies moving within her tummy when she’s lying down.

Towards the end of week eight, your bitch will start producing colostrum, the forerunner to her nutrient- rich milk, and then the milk itself. Continue to feed as much as your bitch will eat and prepare for the birth!

Birth is imminent… Make sure you are ready! Your bitch should be well established in her whelping bed and nesting by now. She will likely become quiet and more introverted than normal, preparing for the birth. Feed as much as your bitch will eat, but be prepared that her appetite may drop off as the time of whelping comes closer.

Begin taking your bitch’s temperature several times a day, and if the pregnancy progresses past the 60th day, every few hours day and night in order to identify the impending onset of labour. 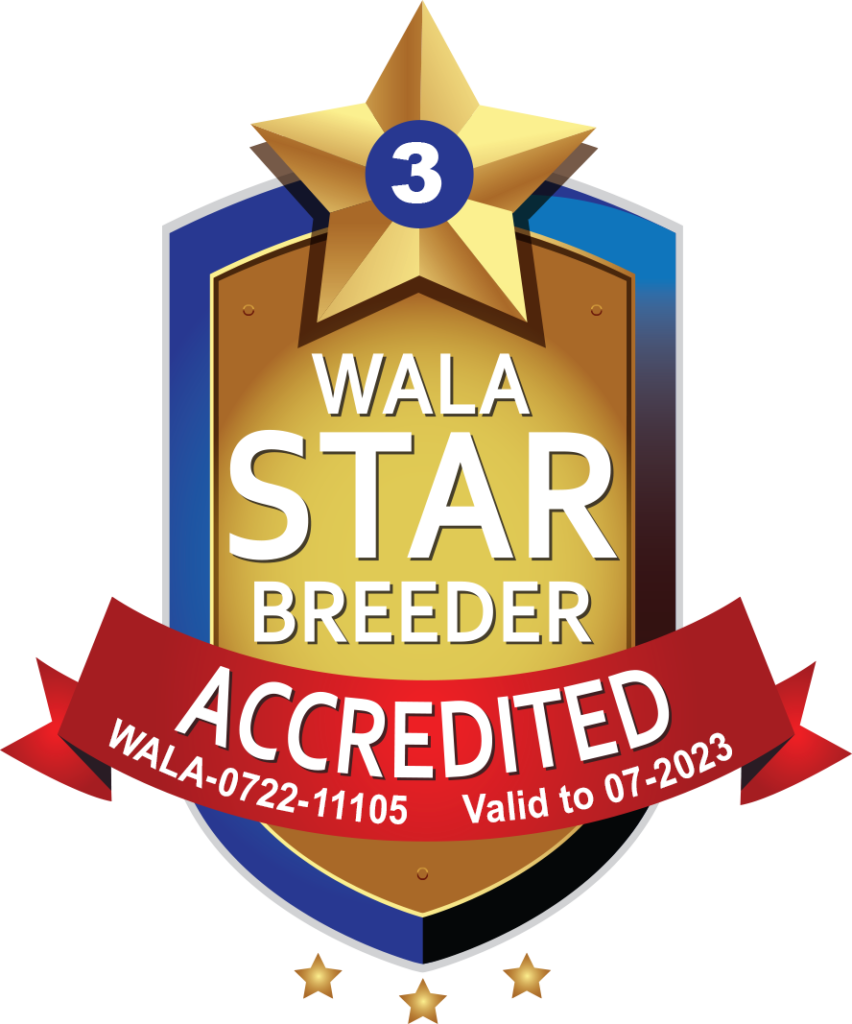 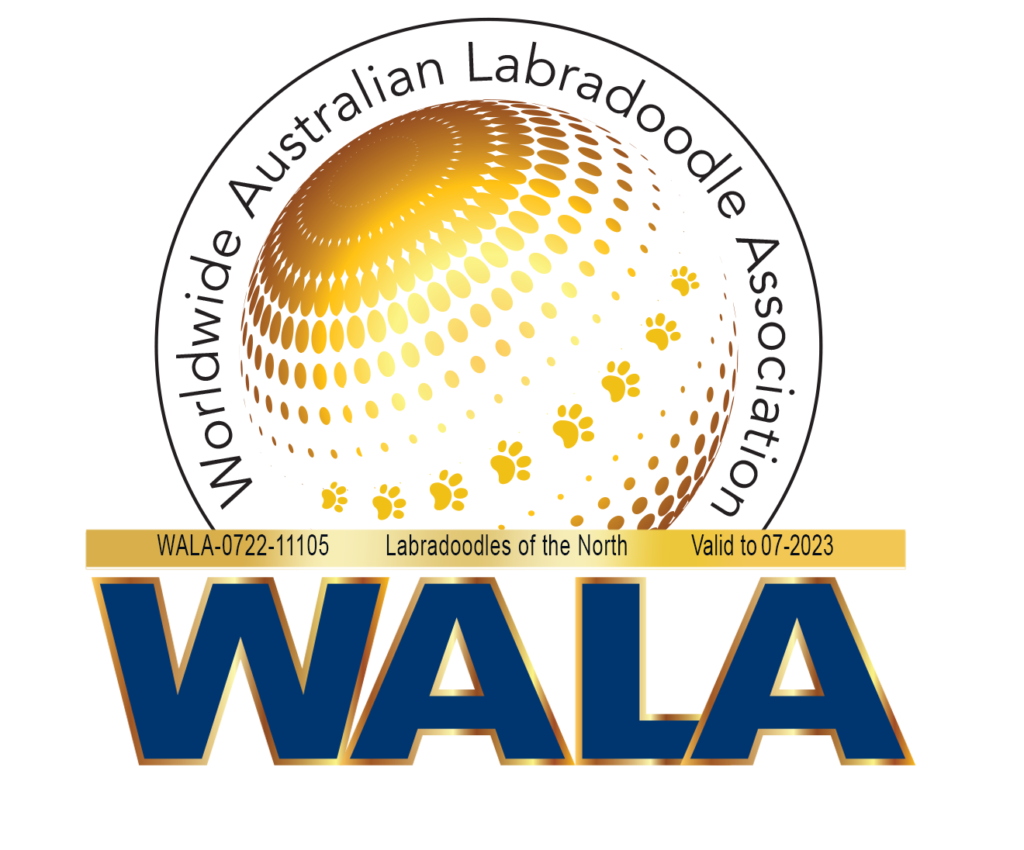